Buy a comic for Christmas!

Just a thought I've been having, but wouldn't it be great if more people got given comics as presents for Christmas?  Even better, why not buy a small-press comic for someone, so that not only do you end up giving someone something unique and a bit different, but also you can feel good about supporting an independent creator and not a high street chain.  As I've discovered going to conventions over the last few months, there is just a wealth of amazing work out there, and there's something for everyone.  Maybe we can all make a comics convert out of someone this holiday season! 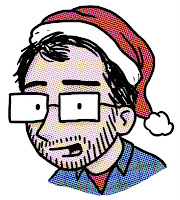 Below are a few recommendations I can offer from my own reading over the last year, that I think would make a good gift, even for those not used to reading comics:

Everything Dies by Box Brown - I can't recommend this one enough.  In fact I won't shut up about it really.  Brown's series is an inky delight - an exploration of the World's religions that is at once respectful, critical and darkly humorous. Available here.

Onion Soup by Dan Berry - Honestly, a wee treasure this one.  Dan's comics are delightful little experiments in what you can do to make a comic.  This one was based on a series of tweets made over the course of a cooking experiment that goes horribly wrong.  Truly hilarious. Available here.

The Signal by Paul Duffield - This one's a work of art.  It might be a slightly quick read, but it's an absolutely beautiful example of hand-drawn and digital art techniques by one of the country's most jaw-dropping artists.  One for the aspiring artist... a great example of the very best of what comics can be. Available here.

Chloe Noonan by Marc Ellerby - A monster hunting comic series that takes its cues from Scott Pilgrim rather than Buffy.  Strange, funny and sweet - indie comics for older kids, young adults, and everyone else, really. Available here.

Solipsistic Pop 3 edited by Tom Humberstone - It's a little unfair for me to recommend this since I feature in it, but it really is an amazing collection full of beautiful, mesmirising comics stories for an all ages audience.  An indie alternative to the Beano annual! Available here.

Hildefolk by Luke Pearson - I'm yet to get my hands on this newly released comic, but from the pictures it looks like a wonderful, warm hearted family-friendly comic book.  Luke's last two self-published comics aren't currently available to buy online, but I'd recommend them too! Available here.


Obviously there is loads more to choose from out there, so don't just take my word for it.  The above are just some of the excellent comics I've read in the last year, and ones I think will appeal to readers that may not yet have delved into the small press, or even comics full stop.

And obviously I've not read even a smidgen of what's available out there.  If you have your own recommendations, especially small press comics that would make good gifts, I'd love to hear about them in the comments.
at 20:55