OUT NOW! Gamish: A Graphic History of Gaming 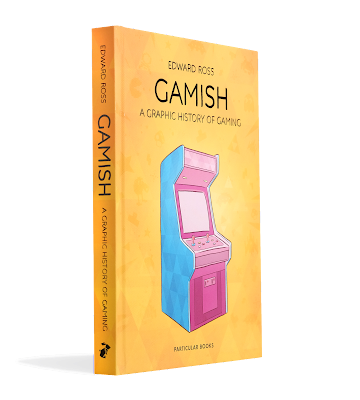 I've got a new book out! And you can buy it now in all good book shops or get a signed and sketched copy from my webshop. From the blurb:

Ever since he first booted up his brother’s dusty old Atari, comic artist Edward Ross has been hooked on video games. Years later, he began to wonder: what makes games so special? Why do we play? And how do games shape the world we live in? This lovingly illustrated book takes us through the history of video games, from the pioneering prototypes of the 1950s to the modern era of blockbuster hits and ingenious indie gems.

Exploring the people and politics behind one of the world’s most exciting art-forms, Gamish is a love letter to something that has always been more than just a game.

For more info and a some preview imagery, visit the book's website. 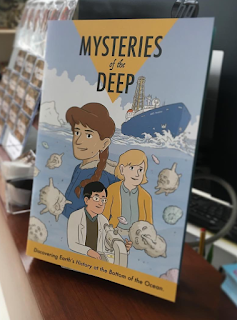 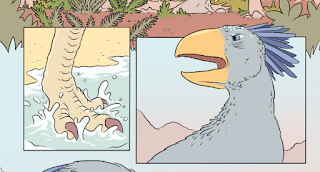 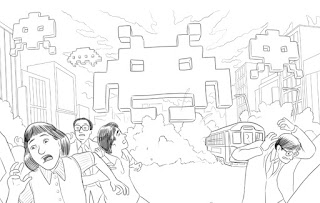 I've been working on a new poetry comic, based on a poem by Russell Jones. It's been a nice exercise, a little bookend between finishing writing on Gamish: A Graphic History of Gaming, and finishing the illustration of it.

This wee project gives me a chance to warm up for something bigger, getting me ready for what's going to be a year's worth of drawing at least.

I loved working on this poem. It's dark and evocative, but leaves loads of space for me to bring something new to the visuals. It's a subversive retelling, or countertelling maybe, of Little Red Riding hood. Although, it's also not. It's something else. And it's great.

This short comic will be part of an anthology of my short story comics from the last few years, making its debut at Thought Bubble Comic Arts Festival in Leeds.

Toxoplasmosis: Unlocking the Secrets of a Mysterious Parasite 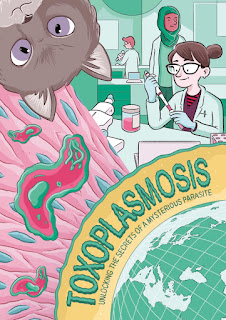 Earlier this year, I had the great pleasure of working with Dr Jamie Hall and Wellcome Centre for Molecular Parasitology on another comic about the parasites the centre studies.

Over the last few years we've been working on a series of short comics about their work. The first two, Malaria: The Battle Against a Microscopic Killer and Sleeping Sickness: The Fight Against a Nightmarish Disease covered two truly devastating diseases.

The latest entry focuses on a far more prevalent, but significantly less deadly disease: Toxoplasmosis. Thought to have infected up to a third of humans worldwide, Toxoplasmosis is thankfully fairly benign under normal circumstances. It's a hugely interesting disease, capable of altering the behaviour of the animals it infects.

You can read Toxoplasmosis: Unlocking the Secrets of a Mysterious Parasite in full here. 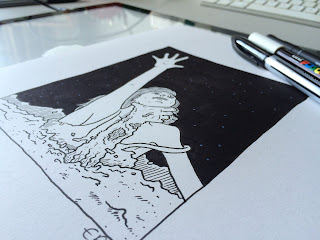 The original Evil dead is one of the most OTT, gloopy and wild horror movies ever made. It was great fun getting to feature it in Filmish: A Graphic Journey Through Film and I thought it would be nice to revisit one of the drawings I did based on the film to test out some new Uniball pens I got.


The Uniball Air I used for the outline is one of the better felt style pens I've used. Its rubber tip gives good line variation and a steady flow - a nice, reliable pen that suits my style. It's a fun one to draw with when I'm not in the mood to make a mess with dip pens. 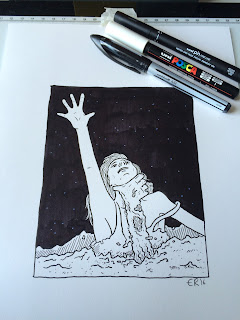 Email ThisBlogThis!Share to TwitterShare to FacebookShare to Pinterest
Labels: filmish

On Saturday I was onstage at the Edinburgh International Book Festival for a reading and chat about my graphic novel Filmish. Joe Gordon from Forbidden Planet Blog was my interviewer, and the hall was pretty full, which was really nice to see.

For the first time ever, I gave a reading of my work - quite an unlikely thing to do as a comic artist, given the visual nature of the medium, but it worked. Reading from the chapter on 'Sets and Architecture', a powerpoint of panels from the chapter offered a necessary visual element. Edinburgh itself decided to add to the mix, with fireworks adding an explosive backdrop to my discussion.

Joe and I spent the rest of the time speaking about where the idea for Filmish came from and how comics offer an interesting and at times challenging way to look at the cinema. Audience questions were very insightful, and I was asked to give my thoughts on both motion comics and VR - two very different media that are similar in their resistance to classification, and fascinating in their hybridity.

The signing afterwards was great fun and I got to meet some really interesting people who had turned out for the talk. Sketching and signing takes time so hopefully no one was too bored by the wait!