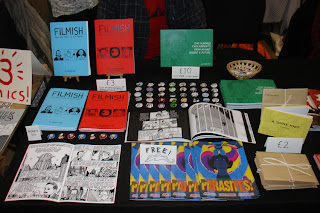 I've been back from the Leeds Sequential Arts Festival for over a week now but only now have I had a chance to have a proper think about my experiences.

All in all it was a fantastic weekend.  I have to say it was a much more close knit experience than my MCM trip in October, largely due to the fact the majority of creators and industry professionals were staying in the same hotel, going to the same bars and restaurants, and hanging around in the same hotel lobby.  The fact that out of convention hours we were all killing time in the same location made a big difference to the atmosphere. 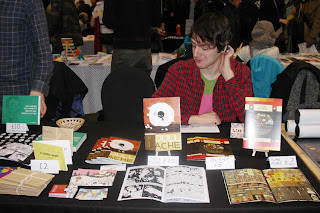 Luke Pearson sitting with his comics.
The one day convention was very enjoyable, but perhaps the single day is too short to entirely justify the costs of attendance.  The atmosphere on the MCM convention floor was ultimately much more electric with so much stuff going on and with all the artists coming in every morning to sell.  Three days in London offered a much better chance to get to know others than the single busy day of Thought Bubble.  I really missed out my chance to properly explore the Thought Bubble floor during that one day, a big disappointment.  Still sales were pretty strong, and I can't complain since I had loads of fun across those two and a half days. 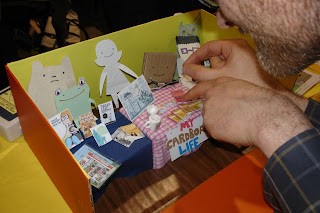 Me buying a miniature copy of Filmish from
Philippa Rice's convention diorama.
On the Sunday I gave a presentation of my work on '100 Tiny Moments' to a group of comics artists, academics and members of the public at the 'Laydeez Do Comics' event, run out of Leeds Art Gallery.

I discussed my experiences of going through that fairly intense 100 day creative process, and looked at some of the themes that emerged as the project progressed.  It was an interesting experience, seeing how a new audience reacted to the work, and giving my first public presentation of work.  The group seemed to respond really well to the project, though it turns out explaining the 'future' element of the autobiographical project was harder than I had foreseen.

The other artists and academics presenting work were really lovely and supportive, and it was interesting getting an insight from women working in the Danish comics scene.  I was really moved by the work of U.S. artist Maureen Burdock, who is using comics to deal with some deadly serious issues, filtering the horrors of sexual abuse and gendercide through a children's book aesthetic.  I strongly recommend you look into the important work she is currently doing.
at 15:12