Filmhouse Pre-Order Exclusive for 'Filmish - A Graphic Journey Through Film'

Filmish probably wouldn’t exist without the Edinburgh Filmhouse. Not long out of university and I was working part-time behind the box office counter in this, the city’s finest independent cinema and the home of the Edinburgh International Film Festival. It was a dream job - a relaxed atmosphere, surrounded by film fans and creative people, and with free access to movies to boot.

I had set off to university with ambitions of making movies, but my time there had actually stoked more of a passion for thinking and writing about films than making them. By the time I was out and into the real world, comics began to grab my attention more seriously than I could have predicted. I’d actually always been a pretty avid drawer of comics, both in childhood and throughout secondary school. Now, between working and watching films, I tentatively began drawing comics again.

Showing bits and pieces around work, I caught the attention of Theresa the Filmhouse marketing manager at the time, who asked me if I’d like to do something with my comics for the Filmhouse members’ newsletter. It was out of this offer that I first conceived the idea for Filmish. Just a short, four page photocopied zine at first, the idea of writing a comic about fascinating elements of film theory and film history really appealed to me. I could do something with this… this could be something. 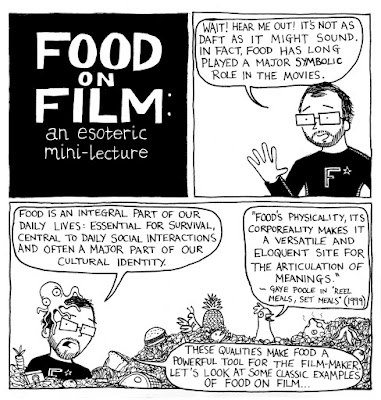 After that first taste, I began work on more, envisioning a self-published comic ready in time for Christmas 2009. Raiding my undergraduate essays for ideas I settled on two more themes, working them up over the next few weeks before cycling out to the Edinburgh College of Art to photocopy a hundred copies of that first issue on the cheap. Setting them down for sale on the Filmhouse box office counter for the first time, Filmish was born.

Over the coming weeks sales began to grow, and before long I had to cycle back out to the ECA, profits from the first one hundred copies in hand to print another hundred. I began branching out, selling at comic shops, art galleries, and even the London BFI Filmstore. Over the next few years I worked on further issues, raising the bar a little each time, and gradually learning what Filmish was and what it could be. Issue 2 (Sets and Architecture) used the single issue to deal with one larger theme, while issue 3 (Technology and Technophobia) was an opportunity to improve my layouts and writing. And throughout all this, Filmhouse was there - my colleagues an indefatigable well of filmic knowledge able to fill in the gaps in my own viewing. This was the home of Filmish, the first place I’d go to when a new issue was hot off the press, and always the first place to sell a copy of each new issue.

But we all move on one day, and it’s somewhat fitting that the prospect of Filmish being published was what forced me to give up my shifts there. As SelfMadeHero signed me on and work began on the book in earnest, I finally gave up my last remaining shift at Filmhouse to focus on writing and drawing this enormous project.

Now that the book is close to release, it’s really nice to be able to reconnect with the Filmhouse and bring Filmish home again. In celebration of the Filmhouse’s crucial role in supporting Filmish, and to say thanks from me both to this Edinburgh institution and the many wonderful customers who took an interest in Filmish over the years, I have teamed up with Filmhouse to offer their customers the chance to pre-order signed copies of the book, which will come with an exclusive, limited edition Filmhouse bookplate with every copy. I’m really excited about this, and grateful to Filmhouse for still supporting me and my work after all these years.