Solipsistic Pop Volume 4 and Why We Need Anthologies.

Anthologies are important.  When I first became seriously interested in comics it was An Anthology of Graphic Fiction edited by Ivan Brunetti, that really began to open my eyes to the true breadth of creative innovation being done in the form.  From within those pages I first discovered everything from the twisted worlds of Kaz and Gary Panter, to the unsettling work of Henry Darger, and the sweet and evocative autobiography of Jeffrey Brown and James Kochalka. 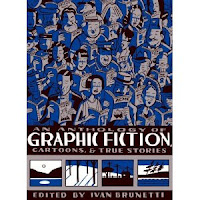 I mean, I knew about a lot of fantastic artists already - Dan Clowes, Chris Ware, Adrian Tomine - but this volume opened things up, bringing a whole range of artists together in one place, defining a moment in comics history, while delving back into the geology to show where we've come from.  Sure, I didn't like all of it - some of the artists I found to be too willfully obtuse and 'underground' for my liking - but that's not the point.  Anthologies are necessary because they open things up.  In a culture where increasingly we're asked to narrow our tastes down to a specific trend, and buy into niche fashions and ideologies while writing off others, the anthology threatens to push back against those narrowing influences, and challenge us with something new. 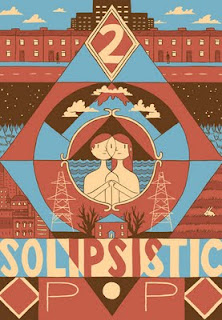 My encounter with Solipsistic Pop did the same for me three years later as Brunetti's anthology had.  It opened things up and showed me a whole mess of comics I wouldn't have encountered otherwise.  Tom Humberstone, editor of Solipsistic Pop, brings together artists from across the UK, working in a number of styles and with a number of voices, and is putting them in one place.  Each volume is like the ring in a tree trunk, an exciting and fascinating moment in UK comics history.  Through Solipsistic Pop I got to discover Luke Pearson, Kristyna Baczynski, Stephen Collins and Mark Oliver to name just a few.  And from there I went on to investigate more and more.


Unlike Brunetti's anthology, Humberstone's is a curated, commissioned collection - each work in there has been made specifically for the anthology, playing to and challenging the volume's theme and tone.  Like musicians in a band, these comic artists play off each other, and push themselves to live up to a really high collective standard.  For the artist, they're no longer working in isolation, but instead have their work up there with some of the best and brightest from the UK comics scene.

Furthermore, I think it is through anthologies that we really get to show off how exciting a comics scene we have in the UK.  From the charming pop-culture geekery of Marc Ellerby's Chloe Noonan and Adam Cadwell's Blood Blokes, through to the comic form journalism of Darryl Cunningham's Psychiatric Tales, or the David Lynchian horrors of Malcy Duff, we've got a really vibrant independent scene, and in anthologies we can display a unity and collective ambition that is less convincing when done alone.

For me it was a huge moment being invited to be in Solipsistic Pop 3, and an even bigger one to be invited back for volume 4.  Each issue challenges me to do my best work and make something that goes well beyond what I have previously done.  Over the next few weeks I'll hopefully be able to put up some of my work in progress, and you should definitely keep an eye on the Solipsistic Pop website for previews of other artists' work.
And to say it again, anthologies are necessary.  If we're going to keep our minds open, and find new work, they're a great place to go, and a good thing to support.  Solipsistic Pop is currently taking pre-orders and is looking for support to get off the ground.  The fourth volume is going to be much more challenging and ambitious than ever before, and it's well worth heading over to the funding page to find out more and show it your support.

Beyond Solipsistic Pop there's a lot more cool stuff out there, and more and more awesome anthologies on the horizon. David O'Connell's Ink + Paper and We Are Words + Pictures' Paper Science series are a couple of exciting examples.  It's a really exhilirating time to be a comics artist, and if we support and spread the word about these collections, everyone benefits.  As the UK comics scene grows, so will anthology series like Solipsistic Pop, and in on their shoulders new upstarts will push us ever forward.  New creators will be spurred forward like I was, seeing work collected together that isn't shy about being ambitious, challenging and creative.