The Edward Ross Comics Roadshow will be appearing this weekend simultaneously at MCM Comics Village in London and the WAW+P Comics Classes at Hay Festival in Wales.

Mary will be selling my comics on my behalf and enjoying the fun of MCM during the three days of the convention - this Friday, Saturday and Sunday (27th -29th May).  There will be copies of my usual stuff, including the still quite new Filmish #3 and 100 Tiny Moments, as well as some shiny new postcards. 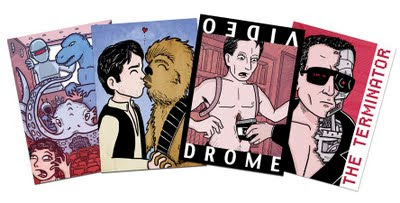 The whole thing's a bit of experiment to see if it's possible to sell comics without the artist in person, and if it doesn't work out, at least Mary gets a fun holiday out of it.  If you're in London that weekend, I truly recommend making a day of visiting MCM.  It's geek paradise, with loads of computer game booths, movie promotion stuff, cosplay, and most importantly dozens of fantastic comics creators selling and talking about their work.

Meanwhile I'll be with We Are Words + Pictures teaching comics to young folk at Hayfever, the kid-friendly spin-off of Hay festival.  After the success of Edinburgh's recent Drop In + Draw and the fun we all had at Latitude last year, I'm very excited by this one, and it'll be a pleasure to work alongside comics experts Tom Humberstone, Anna Saunders, Ted Brandt and Anne Holiday spreading the fun of comics!

We're there for the first weekend of Hay, the 28th and 29th of May.  If you're there, drop by and join in!  The blurb for the event is:


Create your own comic book character
Make stories with words + pictures
What would a character that you made up from scratch look like? Would they have a beard or tentacles or tiny pointed feet? Would they be tall or chubby or have piercing blue eyes? Well, the We Are Words + Pictures team are here to help you decide and put your ideas into practice. With established comic artists and illustrators on hand we’ll get you designing your very own comic book character and developing a story for them to feature in.