A few months ago my friend Jamie approached me with an idea he'd be harbouring of participating in the Glasgow West End Festival to help raise public awareness of the work he and his colleagues do researching tropical parasites at the Wellcome Trust Centre for Molecular Parasitology.

The plan was simple, but definitely crazy: to build a giant trypanosome float for the festival's parade, and to hand out comics to explain what was going on.  It would be like a Chinese dragon, a 7 meter long parasite held aloft on poles, twisting its way through Kelvingrove park amongst the colourful floats and costumes of the parade.

The idea fell by the wayside for a while, and it soon reached the point where we were at risk of not having enough time to get something made.  And that's when we decided to get to work on it.

With funding from the Wellcome Trust I was able to get on board New York artist Rachel Morris to design the cover and a diagram for the back, giving me breathing room to focus on creating the internal comic goodness.

The writing process was definitely a challenge, mainly due to trying to balance clarity with the complexity inherent in the subject.  We wanted to introduce our audience to three major parasites studied at the Centre: Plasmodium, Trypanosoma Brucei and Leishmania. 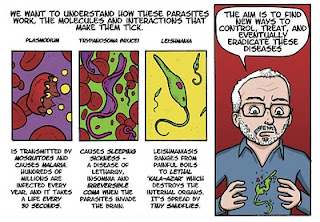 Our hope was to avoid condescension, over-simplification and anthropomorphism, while remaining engaging and accessible to a large audience.  I think what we came up with might be a struggle for young children, but a wide audience will hopefully be able to engage with it.

Since we started work the project has expanded in scope.  From our original plan of 500 copies, it has been increased to 5,000 at the behest of the department, who I think have seen our work as an excellent opportunity to get the word out about what the department is doing. 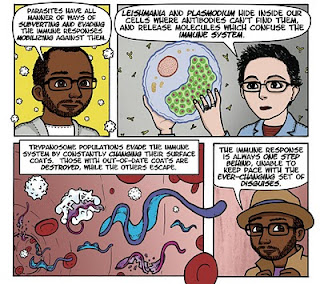 I'm really excited to see the outcomes of our efforts.  The work Rachel has produced is brilliant, and gives the comic a really enticing first impression.  And inside we've done six full-colour pages that I'm really pleased with. 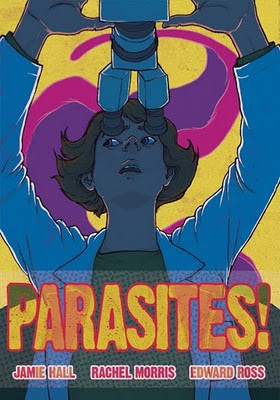