Here's the outcome of a recent commission by an old school friend to illustrate an image based on the poignant Edwin Morgan poem 'In The Snack Bar'.  I like the bald guy in the background, happily chewing on a burger. 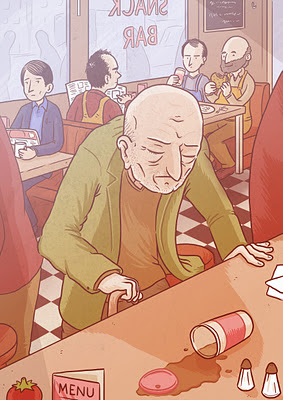 The poem itself is below...

THE SNACK BAR
A cup capsizes along the formica,
slithering with a dull clatter.
A few heads turn in the crowded evening snack-bar.
An old man is trying to get to his feet
from the low round stool fixed to the floor.
Slowly he levers himself up, his hands have no power.
He is up as far as he can get. The dismal hump
looming over him forces his head down.
He stands in his stained beltless garberdine
like a monstrous animal caught in a tent
in some story. He sways slightly,
the face not seen, bent down
in shadow under his cap.
Even on his feet he is staring at the floor
or would be, if he could see.
I notice now his stick, once painted white
but scuffed and muddy, hanging from his right arm.
Long blind, hunchback born, half paralysed
he stands
fumbling with the stick
and speaks:
‘I want –to go to the-toilet.’


It is down two flights of stairs, but we go.
I take his arm. ‘Give me-your arm-it’s better,’ he says.
Inch by inch we drift towards the stairs.
A few yards of floor are like a landscape
to be negotiated, in the slow setting out
time has almost stopped. I concentrate
my life to his: crunch of spilt sugar,
slidy puddle from the night’s umbrellas,
table edges, people’s feet,
hiss of the coffee-machine, voices and laughter,
smell of a cigar, hamburgers, wet coats steaming,
and the slow dangerous inches to the stairs.
I put his right hand on the rail
and take his stick. He clings to me. The stick
is in his left hand, probing the treads
I guide his arm and tell him the steps.
And slowly we go down. And slowly we go down.
White tiles and mirrors at last. He shambles
uncouth into the clinical gleam.
I set him in position, stand behind him
and wait with his stick.
His brooding reflection darkens the mirror
but the trickle of his water is thin and slow,
an old man’s apology for living.
Painful ages to close his trousers and coat –
I do up the last buttons for him.
He asks doubtfully, ‘Can I- wash my hands?’
I fill the basin, clasp his soft fingers round the soap.
He washes, feebly, patiently. There is no towel.
I press the pedal of the drier, draw his hands
gently into the roar of the hot air.
But he cannot rub them together,
drags out a handkerchief to finish.
He is glad to leave the contraption, and face the stairs.
He climbs, and steadily enough.
He climbs, we climb. He climbs
with many pauses but with that one
persisting patience of the undefeated
which is the nature of man when all is said.
And slowly we go up. And slowly we go up.
The faltering, unfaltering steps
take him at last to the door
across that endless, yet not endless waste of floor.


I watch him helped on a bus. It shudders off in the rain.
The conductor bends to hear where he wants to go.
Wherever he could go it would be dark
and yet he must trust men.
Without embarrassment or shame
he must announce his most pitiful needs
in a public place. No one sees his face.
Does he know how frightening he is in his strangeness
under his mountainous coat, his hands like wet leaves
stuck to the half-white stick?
His life depends on many who would evade him.
But he cannot reckon up the chances,
having one thing to do,
to haul his blind hump through these rains of August.
Dear Christ, to be born for this!