Maps to Live By - Making of

Solipsistic Pop vol. 4 is just about to be released to the public.  We received our advance copy the other day and I have to say it's more wonderful than I imagined.  Editor Tom Humberstone has crafted a top class anthology, and the artists involved have all pushed their work into new and interesting places.  It's on a par with any comics anthology I've ever seen, reminding me of the quality seen in the pages of Best American Comics or RAW, and it showcases a breadth of talent that evinces the healthy state of U.K. comics today.

I'm really proud to be a part of it.

I thought it would be nice today to talk about the making of my own piece for the anthology.  For most of my comics career so far I've been creating documentary style comics, mostly about film theory and parasitology.  It's an exciting niche to work in, but one that trains certain tendencies and neglects others.  My work up until this year had generally been very un-sequential and has had very little storytelling in it.  This year I decided to work those other muscles, first with my wordless piece for Paper Science 5, and then with this, my short story Maps To Live By.

The story was sparked off when I met up with Tom in May while he was planning this fourth volume of the exemplary anthology.  Over a game of the Battlestar Galactica Boardgame (honestly, it's amazing) he talked about his idea for the volume.  The theme of maps struck me straight away, as well as his insistence that the artists should explore more complex formal and narrative themes than in the previous kid friendly edition.

I started to see in this a story of my family's complex maps: my Grandfather's childhood in India, the son of a Scottish man and an Indian woman; my father's childhood in Scotland, with his Anglo-Indian father and Swiss mother.  It wasn't just the idea of physical maps of course, but those deeper, more complex maps we experience: the maps of race and culture and identity that we're expected to read, follow and understand every day.  It was the idea of receiving a map you're not sure what to do with, or a set of maps that conflict with each other, and show you there's no simple route to follow.

This family history I'd explored before in my autobiographical project '100 Tiny Moments From My Past, Present and Future', and it was a theme that I felt and still feel has more to be said about it.  These are ideas and debates that sit right at the heart of my family's experience of the world, and I wanted to look at them through this comic book lens.

I immediately knew as well that this story needed to be told by both myself and my father, Peter.  It's his story at the heart of all this, and his voice that told the tale to me.  These events have been part of the family oral history.  Very little of this is written down, and what was interesting is that as we compared notes with the documentation that does exist, we found that not everything added up.  Thus, this story is not so much a factual reconstruction of events, as a continuation of that oral history, complete with those half-truths, grey areas and convenient fabrications that exist in every family's story of itself.

The writing process was a fantastic experience.  Peter and I would meet up with these half formed ideas and chip away at the scenes we'd imagined.  We work well together, and it was amazing confronting all these pieces of family history, and getting to know each other better in the process.  I'd say the writing of it was more like sculpture than anything.  We started by trying to put it all into words, soon finding that a better way was to piece together the pictures and words simultaneously.

We actually moved the writing into the physical space, printing off the sketches I'd done in Photoshop and re-arranging them on the carpet, re-writing them as the pieces slowly sifted together. 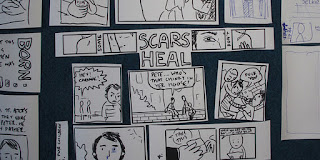 Then, I'd work up a more finalised composition of panels and content..

Before moving on to the digital pencilling process.  A lot of these images were based on real family photos, hopefully giving the scenes an air of authenticity.

Finally I inked and coloured the piece. 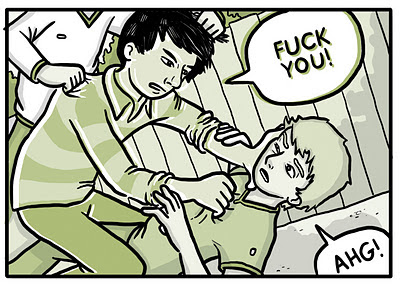 I don't want to give too much of the piece away, so I'm going to leave it at that.  It was certainly the most complex and challenging comic I've ever written, in so many ways.  From the layouts and narrative structure, through to the content itself, I've tried to do my best to live up to both the nuance and complexity of the story we took on, and to the quality of the artists on show in this latest edition of Solipsistic Pop.

I definitely recommend ordering a copy when it comes out, so keep your eyes on the website here or on my twitter, since I'll no doubt talk about this once it's out.


I should also finish by saying thanks to everyone who helped in the making of this short comic, which was such a big undertaking:  Mary and Margaret for checking it over and making sure it made sense, Tom Hunt for his input and advice on the story, and Anita for digging around the family history.
at 09:35