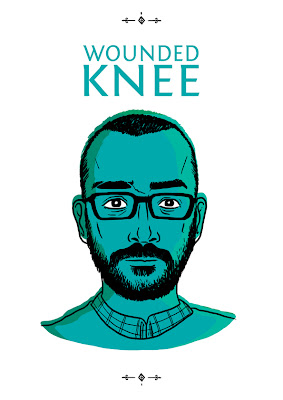 I'm illustrating another flyer for my awesome-good friends at Screen Bandita, a sequel to a job I did for them almost two years ago.  Some of the very first illustrations I posted on this here blog were from that job, and it's a bit of a strange, sentimental, return-to-sender type moment for me doing it again.  It really makes you think...

I'm illustrating four bands/artists who'll be playing alternafolk in time to amazing Scottish Screen Archive footage at the event, which will be in Edinburgh later this year.  I'll post details soon enough, but right now here's an image of Drew Wright, A.K.A Wounded Knee, whose music you should listen to.
at 22:36