It's been a busy few weeks and there's a lot of 'work in progress' at the moment.  But here's some cool stuff in the meantime.

I did another Drop In + Draw with the Edinburgh League of Comics, which went surprisingly well after a faltering start on the first day of the event.  Doing a comic book drawing session in a Shopping Mall had its pluses and minuses - benefits being that we got to take comics drawing to an interesting new location and give kids a chance to do some drawing who might otherwise not always get the same kinds of opportunities.  The downside of course was that most people were there to shop! 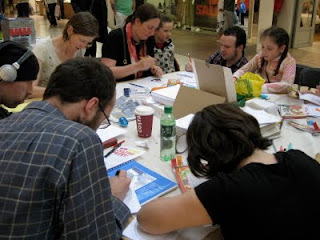 Still, it went very well in the end and our Sunday session was packed with people who had come out especially.  You can read more about the event at the ELC Blog.  I drew this stuff while I was there: 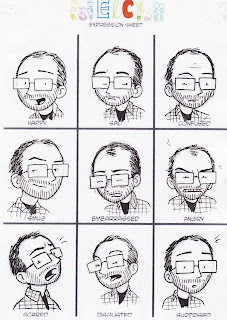 Meanwhile, Patrick Tobin has written a lovely and insightful review of Filmish for 'Multiversity Comics'.  It's well worth a read if you're interested!  From the review:

Where most academic film writing is a closed (and often locked) door, Filmish is an open invitation, and all the better for it. [...] Filmish exists in one of the spaces between nerddoms, where ideas from different media and disciplines can freely bleed into one another and create something unique.
-Patrick Tobin

And in other news, Paper Science 5 arrived in the post.  It's the newspaper format comics anthology edited by Matt Sheret that's just a beautiful collection of absolutely top class comics work from UK based creators.  And I'm in it too, with a short piece called 'Dust', my first ever wordless comic story.

You need to buy yourself a copy, or better yet a subscription to a whole year's worth of tasty comics. Go here and do that now!
at 16:57