Last weekend Mary and I hopped on a train and journeyed down to London to attend the MCM Expo, where I'd booked a stall to sell comics alongside the fantastic Luke Pearson.  For all three of us this was our first convention, and the first time any of us had run a stall selling comics.  The whole weekend was an amazing experience, meeting dozens of talented comics artists from across the country, and witnessing the full-on madness of a convention where over 40,000 people attend over the course of a weekend.

Most amazing was the huge number and variety of cosplayers you could watch walking around the hall.  Dressed as anime and manga characters, superheroes and computer game icons, these people were amazing to watch go by, even if I didn't recognise 80% of the characters on show. 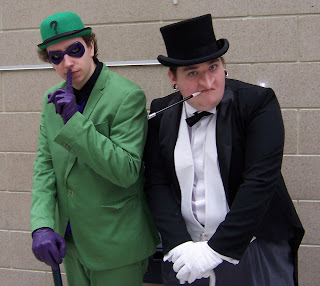 Ultimately the event was perhaps not most geared towards the small press comics scene: the event was largely attended by an audience more interested in manga and cosplay than by idiosyncratic small press wonders.  And what wonders there were for those who took the time to explore the Comic Village.  We bought 26 comics over the weekend, and would have happily bought more.

For my own comics it was a pretty successful weekend, making me back travel and table costs, with a healthy little profit on top.  Most of all I learned a lot from the experience, and will be all the more ready to peddle my work come Thought Bubble later this month.  It was really rewarding making each and every sale, especially when I managed to sell '100 Tiny Moments' to people previously unaware of the project, but willing to part with a fair bit of cash to get to know it.

All in all a great time, and I have to recommend the experience to any small pressers out there who haven't yet.  It's a great chance to meet and chat to your contemporaries, and have a proper insight into how your comics sell, and to whom.

Finally, have a look at our awesome haul! 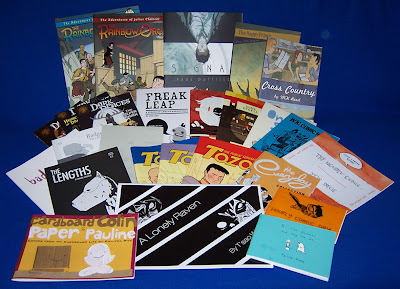 From top left to right:

-The Adventures of Julius Chancer: The Rainbow Orchid by Garen Ewing
-Signal by Paul Duffield
-The Happy Prince illustrated by Tpcat
-Cross Country by M.K. Reid
-Dark Places #1-3 by Steve Dismukes
-Freak Leap by Joe List
-Dull Ache 1 and Some People by Luke Pearson
-Onion Soup by Dan Berry
-WJC Comic No1 by Warwick Johnson Cadwell
-The Hourly Comic by Joe Decie
-Badger, Badger: Then and Now, Polaroids From Other Live Vol.2 and The Lengths by Howard Hardiman
-Tozo: The Public Servant chapters 1-3 by David O’Connell
-The Everyday and Hourly Comic Day by Adam Cadwell
-Cardboard Colin and Paper Pauline by Philippa Rice
-A Lonely Raven by T’sao Wei
-I Love Dinosaurs and They Love Me by Lizz Lunney
at 10:42