So the Hundred Days project wrapped up with a show/exhibition in London on the 10th of March, and now it's all over.  It was a great show, with some fantastic final work from Josie Long et al, and the Hundred Days exhibition was pretty much the 8th Wonder of the World, full of amazing art and curiosities.  I managed to pick up some lovely souvenirs, including a new word by Chrissy Williams, a lego stegosaurus by Daniel Weir and a pretzel postcard by Kellee Rich.

Looking back at the project, I'm pretty sure it made me a better person.  I set out with a few self-improvement goals in mind:
1.  To improve my discipline, and show myself that it's not that hard to work towards a goal a little each day.
2.  To work on my art, and try and get to a level of quality that I'm more happy with.
3.  To show other people my work, and try and decrease my fear I have of doing so.
4.  To be more open with myself and others about my life and about personal matters.
5.  To have a completed comic after 100 days.

Well, I'm definitely more disciplined, having forced myself each day to draw a comic, no matter my mood.  There were days that were definitely a struggle, days where the quality dipped due to a lack of energy and inspiration, where I wished I could just give up and watch TV.  But then, there were days where I was close to giving up and a spark of inspiration allowed me to create work that I am really pleased with.  And I am pleased with the level of quality I managed to achieve, especially in the last 20 days, when I really tried to push myself further, and to avoid lazily resorting to a four square-panel structure.  Looking back at some of the early strips can be a little painful in comparison.  I managed to show people my work, and have become more confident about the concept of that, helped as well by the fact that people seemed to really respond to my honesty and openness.  And of course, by sticking with it, I've come out the other end with 100 short comics. 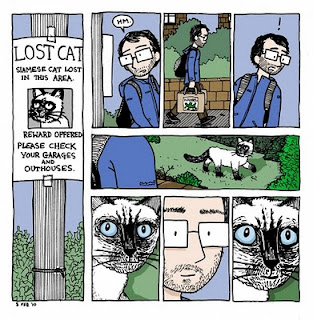 Above: This comic was a bit of a turning point for me.  It was a day with a bit of extra free time, and I was presented with a story I knew I wanted to tell.  Instead of the usual mad dash to come up with an idea late in the evening, I had a lot more time to mull it over, and the opportunity to make more of the layout than I usually would.  I realised quickly that it wasn't necessarily easier to create a simple four panel layout, and what extra time I might spend discovering the best layout of panels would be offset by the satisfaction of a good looking layout.  This story was also interesting for its notable lack of dialogue, though I now wish I'd had the confidence to have absolutely no speech there whatsoever. 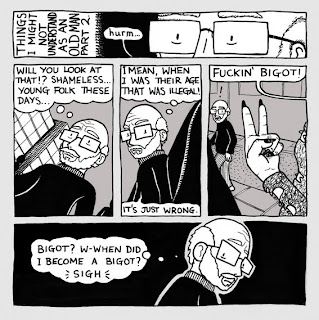 Above:  This, and its prequel, were strips I had planned in my head for a while.  There is something sad about the idea that as we grow older we get left behind by culture and society.  I don't like to think it, but there is always that chance that one day my views of morality and propriety will be considered outmoded, bigoted even.  This was a strip, I have to admit, I was a little worried about being misunderstood.  Being called a bigot is no small thing, and that label hangs heavily over my future self's head.  I don't like the idea of it one bit, and feared that people would interpret the offpanel action as something specific that we accept in modern times.  Quite the opposite, what might make me and others bigots in the future is something we probably can't even imagine right now, or at least something we think we could never condone. 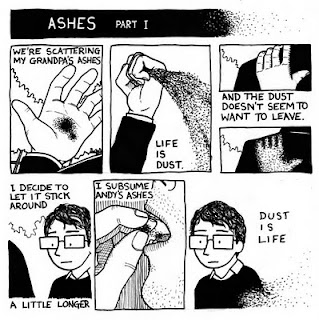 Above:  As the project wound towards the end, I think I became a little fixated on death.  This was at once to do with the looming end of the project turning my thoughts towards themes of mortality and endings, and the fact that I was increasingly aware of those gaps in my history that I'd left.  I think this is one of my most visually beautiful and poetic strips, and one that relies both on pictorial and textual elements to achieve its full effect.  Also, at this point I knew how I wanted to end the project, and the "Ashes Part I" title was a deliberate foreshadowing of "Ashes Part II", the third to last, though spiritual end to the 100 Tiny Moments. 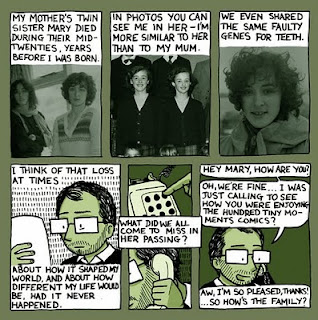 Above:  This was another strip that I knew I wanted to do for a long time, though it took me a while to muster the courage to tackle.  I think I took a bit of a risk using actual photographs, but when I set out to begin drawing I realised there was no way I could capture this once vital human being who I had never met.  There was something so wonderful and tragic in those photos that I knew I couldn't capture.  The alternative universe ending to that strip was also quite hard to write, but I think an important choice.  Showing that other world only highlights what we have lost. 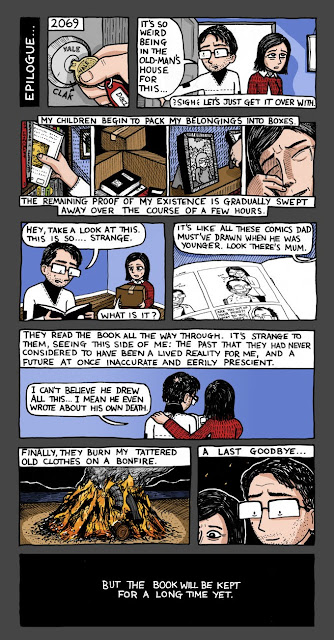 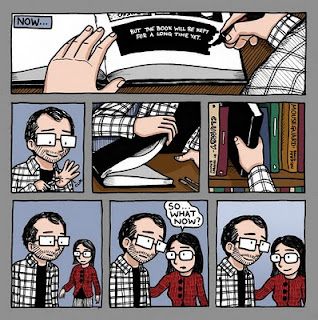 Above:  These last two strips were I think a good end to the project.  The idea of my passing into insignificance offsets the egocentrism of the whole project by suggesting that every one of us is only significant for a tiny moment in history.  We will impact on the lives of our friends and family, our children and theirs.  And we might be remembered beyond that if we're very lucky.  But that doesn't matter, and turning to dust doesn't scare me.  I hadn't originally intended to end with the final present day conclusion, but I think it was a good choice to return to that heart of the strip.

I'll leave the final word to the eloquence of Chrissy Williams, who discusses her feelings on the project on her blog.  I can't think of a better summary of what this project was for me, as well as the very thematic heart of "One Hundred Tiny Moments From My Past, Present and Future", than this:

"We affect other people, so what we do affects them. Small things accumulate into big things. This means that small things matter."