The second comic I did for the Filmhouse. I was less pleased with this one. Time and space constraints meant I could only do a six panel piece. Not really enough room to do justice to a country's entire film history pre-2003. 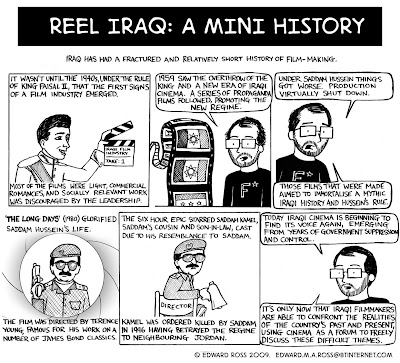 If you think that King Faisal II's hair looks bad, you should have seen him when he was wearing his Admiral's hat. This was an instance where I did quite a bit of computer fixing, but really ultimately to the detriment of the image. For example the gunbarrel effect in panel 4 just looks bad: an airbrush effect that doesn't work with my thick black lines. Sometimes keeping the image with some blemishes intact can work in your favour.
at 19:53