Thanks to funding from Creative Scotland and with support from my publisher SelfMadeHero, this year I was able to attend one of the most exciting and prestigious comic festivals in the world - the Toronto Comic Arts Festival - presenting my graphic novel Filmish to their wonderful and diverse audience. 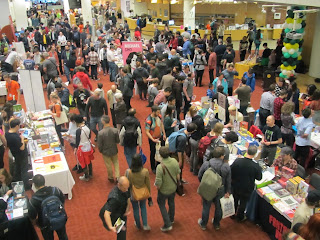 TCAF takes over the enormous Toronto Public Library every year to show off some of the greatest comic art on the planet to a huge and enthusiastic crowd of comic readers. There were 24,000 attendees in 2015 and word was it was even bigger this year. Set over three stories and spilling out into an additional venue, the quantity and quality of work on show was astonishing.

After a long flight out and then a quiet day of seeing Toronto in the rain, the festival began. My first stop was to give a talk about my work to an audience at the nearby Marriott hotel. My first piece of solo public speaking, I think it went well. My talk laid out the origins of Filmish as a piece of self-published work and its journey towards becoming a graphic novel, taking in some of my influences and favourite film theories along the way. The discussion afterwards was really interesting, bringing up some areas that would merit further investigation in the future. It was an honour to have been invited to talk as part of TCAF's official programme of events. 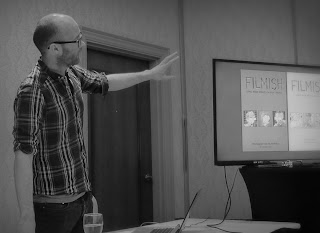 After the talk I made my way to the library, setting up at the SelfMadeHero table alongside fellow artists Barbara Yelin and Mike Medaglia. Over the next two days I spent the majority of my time at the table, giving me the wonderful opportunity to chat with customers and fellow artists. 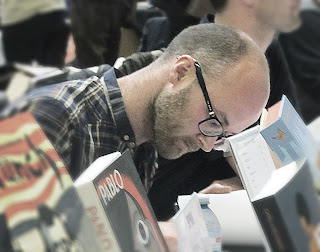 It's truly special meeting people who have enjoyed your work, and lovely to hear that Filmish is inspiring people to watch new movies and think about film differently. In addition I had some very promising chats with a few individuals, and was able to make some connections and lay some preliminary groundwork for my next graphic novel.

After the festival was over, I stuck around in Toronto for a few days, basking in the warm afterglow that comes from attending an event of such concentrated creative talent. It's always inspiring to go to comic festivals, and this was no exception. The artistry on show was off the charts, with artists from across the world coming together in celebration of the comics medium. It makes you want to read more comics, make more comics, and up your game.

It was fortunate I had arranged to stick around, as well. Following on from a chat at TCAF, I was contacted by a producer from the Canadian TV channel Space, looking to do an interview with me about my work. Arriving at the studios I met with the producer Mark, who showed me some original artwork from Scott McCloud's 'Understanding Comics'. It was such a treat to see them, meticulously drawn and as inspiring as ever. 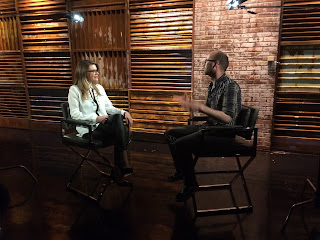 I then met the host of the show, the very kind and enthusiastic Morgan Hoffman. The resulting chat went really well - full of my trademark gesticulating, and covering everything from A Trip to the Moon to Die Hard. And it was another first for me, appearing on television! Watch the segment here.

Finally, some advice for people considering applying for TCAF in the future. I can absolutely recommend that comic artists aim to attend TCAF at some point in their career. It's a wonderful opportunity to present your work to a large North American audience and meet with your comics contemporaries. I don't think there's another show like it, and Toronto seems to be a city in love with comics where you'll have the potential to raise your work to a new level of visibility.

However, the costs of flights and accommodation would likely make it very difficult for a self-published creator in Europe to break-even without some sort of financial support. In addition, with a huge number of top creators on show, the competition for sales is high. I'd recommend anyone wanting to attend to have experience selling their work at smaller conventions before applying, and make sure they're taking their very best work there to sell. The benefits of attending are massive and well worth the effort if you can afford it.

Again I'm hugely grateful to Creative Scotland and SelfMadeHero for making this trip a reality. It was a pleasure to be a guest of the festival, to give a talk about my work, meet readers and give an interview for Canadian TV. It was a wild week, and one I don't think I'll ever forget. 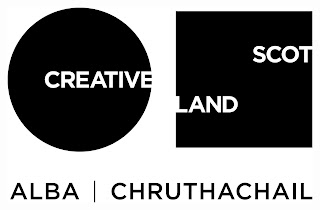