After a two year hiatus, Filmish is coming back with its fourth issue this August.  It returns with a look at a subject that has fascinated me since university - the role of food and eating on film.

Readers of Filmish issue 1 will recognise that I've tackled the subject matter before, in a brief whistle-stop tour that just touched the surface of this fascinating subject.  Since that first issue my work has developed a lot, and I've poured everything I've learned about making comics over the past few years into this issue to try and create an issue of Filmish that is both a pleasure to look at and to read. 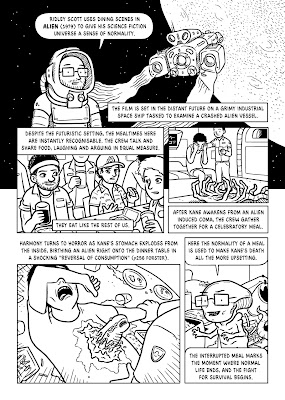 You can book now for my Edinburgh Book Festival event, where I'll be talking alongside Will Morris about my work.