On Science and Comics

Science finds itself in a tricky position when it comes to reaching out to the public.  To most people, science is seen as almost untouchable, a field that few can participate in or even have a say in.  There’s so much required knowledge, so much specialist training, so many facts and formulas, that to interact with and question science feels daunting.


At the end of the day, we must take the scientific community’s word for it that what they say is accurate, true and important. The processes by which they acquire their knowledge are largely hidden from us, and all we normally get to glimpse are the white lab coats, shiny technology and indecipherable iconography of formulas and findings.  As a result, science becomes a sort of mystical power in the public imagination, a force for good or evil that is powered by factors we cannot comprehend.

Of course it doesn’t need to be this way.  There are scientists, writers and artists out there who strive to communicate scientific ideas, and at the best of times to explain how the process of discovery works.  By investing the time and effort in explaining these ideas and processes, the divide between the scientific world and the general public might gradually shrink.

There are many excellent examples of public engagement with science out there, from Richard Dawkins’ The Selfish Gene to Ben Goldacre’s Bad Science and so on.

Yet within comics, good examples of works that engage with science and the scientific process are few and far between.  There are many comics that deal with medicine and disease, normally from the patient or caregiver’s point of view, but few that get down to the nitty-gritty of explaining and engaging with science.

A very interesting recent example of good engagement with science have been the comics of Darryl Cunningham.  His Psychiatric Tales and recent Science Tales work to truly engage the reader with science.  Psychiatric Tales is a more personal account, but it doesn't shy away from discussing the processes and science behind treatments.  Science Tales meanwhile investigates the debates around certain fields of science such as evolution and the MMR vaccine.

I have two recent projects of my own that work to close the gap between science and the public.  The first and bigger project was Malaria: The Battle Against A Microscopic Killer which I collaborated on with my friend Jamie Hall.  The second was Hope Beyond Hype: A Story of Stem Cells From Discovery to Therapy, which was written by Scottish sci-fi author Ken MacLeod, Jamie and I. 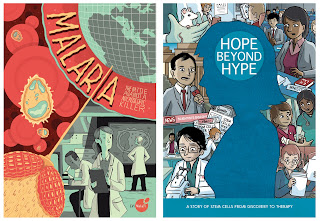 These comics have both been commissioned by multinational research groups to help explain the work they do, and to let the public know some of the unseen challenges faced as they work to understand more about diseases and develop treatments for them.

I think this is where comics show a lot of their strengths for communication.  If science is a distant and specialist subject in the public imagination, then comics are perhaps the opposite, considered approachable and non-threatening to most.  Well, that's the idea behind it anyway.

These projects were a challenge, especially when it came to communicating some very complex ideas in a very small space.  But again that's where comics can give strength - with words and pictures working together, big ideas can be made more widely understandable.  This took a lot of our time and effort, and along the way their were numerous revisions, scrapped ideas and reworked metaphors.


In the end, I'm thrilled with the results.  I believe these ideas benefit from being told this way, and hopefully we'll manage to bring a sense of science to a much larger audience.  Public engagement with science is a tough task, but a rewarding one too.  My hope is that I get to continue pursuing these projects, hopefully getting to cover a wide breadth of science along the way, while also balancing this kind of stuff with more personal works.

You can read or download Hope Beyond Hype here.
at 17:01