This is not the regular voice of Edward Ross, this is his partner in crime, Mary Campbell, who has just spent the weekend at the MCM Expo in London, selling Filmish and Eddie's other work.

This was only my second Expo, but my hopes were high going in, based on my last experience, which involved meeting lovely people, getting great new comics, and having fun spotting the costumes I could recognise among the cosplayers.
I knew this Expo would be different, as I was going it alone while Eddie partied hard in Wales (Only kidding! - see post below). It was an experiment really, to see if the creator was needed to sell their own work, or if the work could sell itself. Over the first two days it seemed as if the creator needed to be there, as sales were not going as well as last year. But after a Saturday spent freaking out about what a disaster the convention was going to be, I went home and had a good nights sleep, then came in on Sunday morning with an new table plan and a positive attitude. I stood up, I was smiling, chatting to people, singing Bon Jovi, generally being welcoming -  and sales went really well.
I learned a valuable lesson that day... don't expect a comic about film theory to sell itself!
It was lovely to see people who were fans of Eddie's work already, and just wanted more, or to see people who latched onto the idea immediately - "A comic about film theory, that's just what i've always wanted!" These people brightened up my day, and were always fun to talk to.  Other fun people to chat to were the comics creators there to sell their work. For a comic geek like me it is great hearing about the process behind a comic, exciting new projects on the horizon, or recommendations for new comics to read.
From these excellent people I got a wide variety of comics loot. Although I couldn't buy something from everyone I wanted to - I would have gone bankrupt - I did pick up some great comics and artwork, which kept me busy on my train ride home. All purchases were much enjoyed, but a special shout out has to go to the two titles that left me begging for more... the next Lengths and Blood Blokes cannot come quickly enough for me!
Also purchased was this fab drawing from the lovely John Allison - me and Eddie with superpowers! If only it were true... 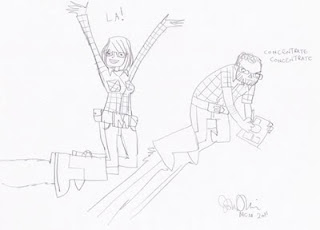 And with that I will stop rambling excitedly and let normal service resume as soon as possible...
at 17:29