I'll be back down in London for the Sci-Fi festival over the May Bank Holiday Weekend, where I'll be participating in a panel discussion about 'Comics and Moving Pictures'. There's a whole weekend of events planned, including a number of panels and discussions, a drop in comics class with Tom Humberstone and WAW+P, film screenings, and comics stalls. 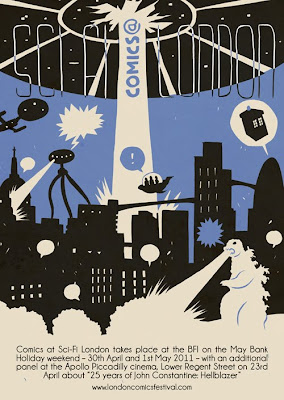 Flyer by Tom Humberstone
The discussion is on Sunday 1st May at 3.30pm at the BFI Southbank.  I'll be chatting with creators Martin Fisher (Battle among the stars), Huw J. Davies (Freeman, Garth) and Roger Mason (2000AD, The Mice).  I'll also be selling comics and hanging around all weekend.

Full details can be found at the London Comics Festival website.
at 09:59