Will Pickvance and Friends Flyer Design.

I was recently asked by Edinburgh based musician Will Pickvance to design a flyer for his upcoming Fringe show.  He asked me, having seen my work illustrating him for the Screen Bandita's 'Eruption of Kilauea' event.

"International pianist and entertaininer Will Pickvance raises a merry Hell bang in the middle of St. John’s cavernous crypt for an enchanting two hours of candle-lit carnival.
Stride piano outbursts one minute, heart-breaking laments the next, Will invites concert violinists, todays’ troubadours, the talented, the skilled and the thirsty to entertain you with Festival Vaudeville and Helium Karaoke.

With different acts each night, selected from the cream of this year’s Festival, you never know who you’ll be sharing a table with.  Come and see the Albert Hall squeezed into your local pub."

The visual idea came quickly, based on Will's descriptions of his mad, chaotic, carnivalesque shows, and the revelation that Will often wears a grotesque pig mask for parts of his act.  I developed the idea from an initial sketch (seen below) and then drafted it out properly, before inking it (partly with a new brush pen I'm experimenting with).

However, this first version wasn't quite doing it for Will, or for me.  After some tinkering, we came up with the image below.  The crowd is now full of interesting characters, instead of gray silhouettes, and the addition of a major female presence balances out the image better, and adds more visual variety. 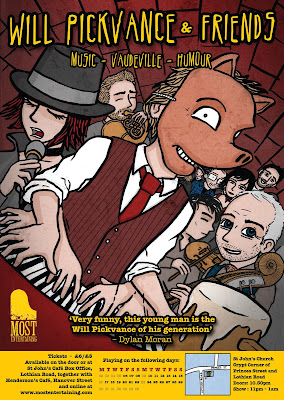 Will's show should be quite an event, and I'm excited to be going to see it, having already illustrated it blind.  Check out the poster for details, or visit www.mostentertaining.com.
at 13:09