The hard working folk at We Are Words + Pictures have brought together some of the finest comics talent in Britain for the second issue of Paper Science.  It's a newspaper format anthology that they're going to be giving away for free at Orbital Comics in London on the 1st of May (which is Free Comic Book Day).  I've been lucky enough to have been included in the collection, with a full colour version of my Food on Film "Filmish" essay.  If you're in London you should pop in and grab your copy. 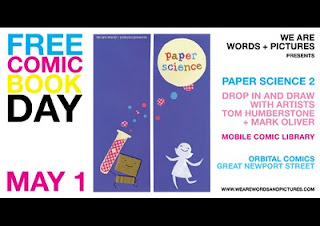 Saturday May 1st is Free Comic Book Day, and to celebrate We Are Words + Pictures will be once again releasing the talents of UK comics press on you all with a new edition of Paper Science.
Sporting a brand new cover by Philippa Rice, we’ll be setting ourselves up in London’s Orbital Comics, with 500 free copies to distribute to anyone who comes in. We’ll also be running a Drop In + Draw day there, featuring Tom Humberstone and Mark Oliver as well as the Mobile Library.
This new edition of Paper Science has been created with the generous assistance of Newspaper Club. They’re printing us a 16page, full-colour edition of 500 in time for the event. We’ll also be offering a print-ready PDF of the paper on this site on Saturday under a Creative Commons license, for you to read onscreen or to take to a printer. You can knock up a run wherever you are, just let us know.
We Are Words + Pictures are joined in this madness, in order of appearance, by Philippa Rice, Francesca Cassavetti, Joe Decie, Octavia Raitt, Becky Barnicoat, Daniel Locke, Anne Holiday, Matthew Sheret, Tom Humberstone, Luke Pearson, Adam Cadwell, Geof Banyard, Mark Oliver, Liz Lunney, Douglas Noble, Kristyna Baczynski, Anna Saunders, Kieron Gillen, Jamie McKelvie, Sean Azzopardi, Edward Ross and Marc Ellerby.